I've been reading Jeffery Deaver's novels for years, and enjoying them, for the most part, and always intrigued by his back-of-the-book biography. He's been a lawyer, a journalist and a folk musician, among other things. 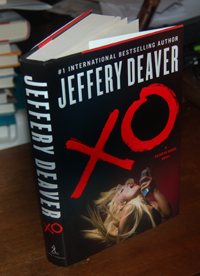 In "XO: A Kathryn Dance Novel," his latest novel, he finally lets his musician side out, big time - not only in a story about a popular country rock musician who has a psycho stalker, but via composing music for the book.

The lyrics, which are printed in full in the back of the book, play a part in the story, but Deaver actually went to the effort - and, no doubt, the fun - of hiring people to perform and record the music. You can hear samples of the tunes at this site.

It's good stuff, which is no surprise. Deaver is very smart and very talented, and he works incredibly hard at everything he does. The book itself is a good read, with Deaver's signature twists and turns of plot. With a Deaver book, a reader never really knows when it is over, until the final page is passed. When you run out of pages to read, that's when Deaver is finished toying with you.

Kathryn Dance is an investigator for the California Bureau of Investigation who specializes in body-language analysis. She first popped up in a Lincoln Rhyme thriller. Rhyme, who only believes in physical evidence, not witnesses, was won over by Dance's skill. And, in fact, Rhyme and his partner and lover, Amelia Sachs, make a brief appearance in this book.

Dance is on vacation in "X.O," and has actually left her sidearm at home, which seems very unlikely for any law-enforcement officer. Still.

She is a music lover who has side business of finding and recording folk music, and is on an arranged trip to record a musician.

And, to have lunch with her friend Kayleigh Towne, who is a young and extremely popular and famous country musician.

Dance gets to the Cowboy Saloon in Fresno, in California's Central Valley, first. She is amused by the joint.

"The dark, woody place, giddily cool, had not a single cowboy artifact. But life in the saddle was well represented - by the women who rode the range, roped, branded and punched cattle ... and did some fancy six-gun work, if you could believe the poster showing an Old West version of Rosie the Riveter shooting bottles off a fence rail."

While she's waiting for Towne, she catalogs the joint's clientele: "Two elderly couples; a trio of tired, jumpsuited utility workers, who'd probably been on the job at dawn; a slim young man in jeans and plaid shirt, studying the old-fashioned jukebox; several businessmen in white shirts and dark ties, minus jackets."

Readers already know that Towne is a little worried about an ardent fan, Edwin Sharp, who's been sending her letters and gifts that indicate that he thinks there is really something between them - that her songs were written for and about him. She has hired a big, very serious bodyguard.

When Towne arrives, Dance meets the bodyguard, who carefully scans everyone in the room, then insists on going outside to stand guard, in the Fresno heat.

Towne tells Dance she was nearly injured earlier, when a big stage light fell and almost hit her.

Then the young man comes over from the jukebox. Towne is polite with him, but he won't go away, even when her roadie and manager ask the man to leave.

"The personal assistant blinked. Obviously, she hadn't recognized the man and would be wondering how he knew her name.

"Then he ignored her too and laughed again, his voice high, eerie. 'It's me, Kayleigh! Edwin Sharp. Your shadow.'"

With that, Deaver is off to the races.

Sharp is sharp, a smart young man who knows the law well enough to skirt around anything really actionable as he proves to be a very clever stalker.

People start dying, in sometimes terrible ways, and while Sharp is certainly suspected, no evidence is found anywhere that points to him.

Dance, even on vacation and without her gun - at first - becomes involved in what grows into a huge investigation.

But is Sharp the bad guy?

This is a Deaver book: Everybody in it, almost, is a suspect, and Deaver gives good reason to think several people, including Sharp, might be the murderer. At the very least, Sharp is one creepy individual.

Dance has a couple of subplots going on, including worry about her two children, about her parents, and about her boyfriend. It's just enough to give some extra depth to this fun read.