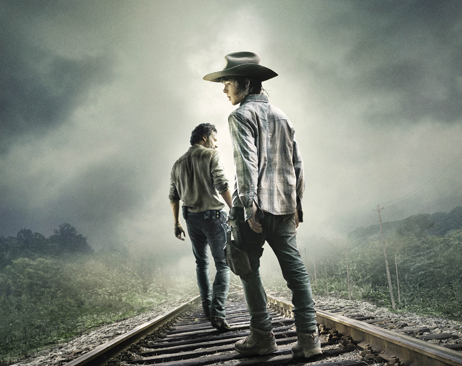 Courtesy of AMC
Andrew Lincoln as Rick Grimes and Chandler Riggs as Carl Grimes in the key art for Season 4B of "The Walking Dead." Click on it to see a larger version.
What's the use of having a TV
if 'Walking Dead' is on break?
Wherein we complain about a favorite series being on hiatus
By John Orr
January 5, 2014

(Spoilers ahead, if you haven't seen the first half of Season 4.)

It was a great weekend for watching football on TV (89 points scored in an NFL playoff where the victor won by one point? Another game, played in a subzero freezer, decided by three points? Somebody call the heart cart, I need the paddles!), but here it is, almost 9 p.m., and I should be watching "The Walking Dead" in a few minutes.

Because the wildly popular show is on its winter break.

For this season and the past two seasons, the series that features a small group of mostly heroic human beings banding together to fight horrid, flesh-eating zombies, is taking a break.

They ran eight episodes, the last of which was a killer thriller that left everybody hanging by their fingernails on the Cliffs of Excitement, and took, like, two months off.

We don't get to find out what happened to Rick, Carl, Carol, Darryl, Michonne and the rest till the show returns on February 9, 2014.

I've always been mystified by the release schedules of television series.

I can't say there have been a lot of TV series I liked, anyway, so really, I seldom cared.

I liked "E.R.," but was deeply frustrated by that program's weird scheduling, and never understood why it was done the way it was. I'd get excited about some storyline, and eagerly anticipate the next chapter, only to tune in to find a re-run. The storyline might not continue for another week or two. What was up with that?

I never got an answer on that, although I would guess it had something to do with production difficulties. I don't know. Or care. That show is long gone!

But now, I am a fan of "The Walking Dead," for its storyline, for the scripting of most episodes, for most of heaping piles of human drama played out by an excellent cast, for its deeper meanings.

And the show is on winter break. Dang!

But, while looking around the web, I came across a podcast, on the blog The Walker Stalkers, where one of the show's producers, Gale Anne Hurd, kind of explains the why of the break, and makes a point I actually appreciate.

"As a person involved in producing the show," she says on a podcast, "It's great to have this opportunity to catch our breath. Especially in post-production. It's a very demanding show for post-production, and you can certainly fall behind. ...

“So for pragmatic reasons, it's great to have an A season and a B season. It also provides us with an opportunity for the kind of storytelling you've seen so far this season, where we can have what many others shows would consider to be a season finale in the mid-season. And we can build up to an even more significant season finale. I think it works for our particular brand of storytelling."

Well, that latter issue I can kind of appreciate. Episode 8 was killer. Powerful stuff that left fans of the show literally gasping for breath. Hershel Greene — world's nicest guy, a font of wisdom — is decapitated by the psychopathic Governor. And then the Governor is killed, and it takes three people to finish him off, not unlike Rasputin.

And the prison is lost as a safe haven, and the entire cast is scattered to the winds.

Yes, that was a hell of a season-ender. Except, it wasn't the season ender. There are eight more episodes coming, starting February 9.

So ... that does almost make the winter break seem like a good thing. Building anticipation and all that.

Except it doesn't. And I don't care about Hurd's post-production problems. The show is making a ton of money, hire more people. I want that show on my Sunday nights. Fifty-two Sundays a year would be fine by me.

A few words about the departed: Scott Wilson played Hershel, and he was warm and wonderful in the part. Even when he reached his nadir and went back to drinking, he still managed to roust himself into do the right thing for the greater good. Wilson is always a good actor to watch. He was excellent in "Monster," for instance, which won Charlize Theron a well-deserved Oscar.

And I liked David Morrissey, who played the sociopathic Governor, even though I am very glad to see the Governor go to hell. Morrissey is a fine actor, and has a beautiful voice. I like plenty of other actors on the show — Norman Reedus is always fun to watch as Daryl Dixon, Danai Gurira is making something more and more compelling of Michonne, and Melissa McBride, Steven Yeun, Lauren Cohan and Chandler Riggs, especially, are fun to watch. But Morrissey's voice is special.

Now we have to wait to see who will still be alive in Episode 9.

The series has been green-lighted for a fifth season. And, there is lots of noise in the blogosphere about a spin-off series, although details of what it might be are hard to pin down.

By the way, the Season 4 premiere of "The Walking Dead" had more than 16 million viewers, which set a record. My guess is that the debut of the second half of the season will draw even more.

I plan to watch it. 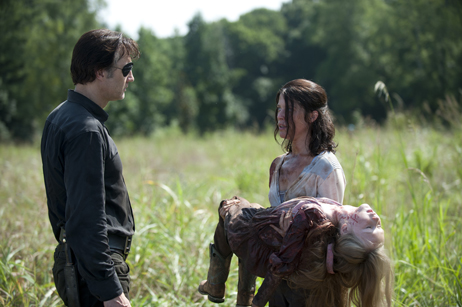 Gene Page / AMC
David Morrissey as The Governor, Audrey Marie Anderson as Lilly and Meyrick Murphy as Meghan in Episode 8 of Season 4 of "The Walking Dead."