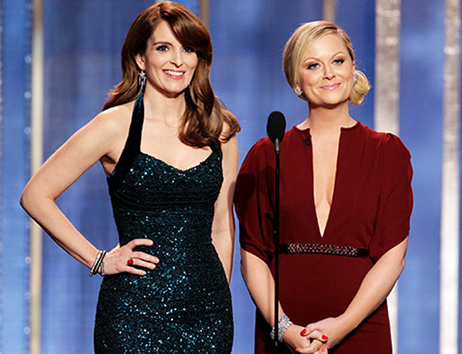 The Golden Globes show is tonight, starting at 5 p.m. Western time, and I am so looking forward to it.

Not because I think the Golden Globes Awards themselves have any real artistic cred, but because the TV show itself has evolved into such a fun party. The best jokes, the best overall sense of fun, lots of beautiful women showing lots of legs and cleavage, and they bring it right to us, through our TV sets.

Over the decades I have worked as an arts & entertainment writer and editor, I never met a regular movie critic who had any real respect for the Hollywood Foreign Press Association.

The rap I usually heard against them was that too many of them were in it just for the perqs — the souvenirs and gewgaws sent to reviewers, the swag bags at the events, the free junkets, and so on — and that too few of them were actual journalists and critics. This kind of complaint was especially loud from critics who were not allowed, by their editors, to accept such goodies.

So, while even the Academy Awards tend to get slammed by the film purists, the Golden Globes were strictly a laughing matter. Nobody among the filmic intelligentsia took them seriously at all.

Fine. Do any of us care what film or what actor wins a Golden Globe?

But the awards show has evolved into one of the most entertaining among the many such shows dragged on to our TVs every year.

I loved it when Ricky Gervais was the host. The man was wickedly funny, and made jokes about pretty much everybody involved.

In 2012, his monologue started with him looking slightly confused and saying, "Where was I?"

Hahaha! He got a big laugh from the audience.

Gervais had moments people thought of as mean-spirited. A more mild shot from 2010: "I hope I haven’t offended anyone. It’s not my fault [points at his drink]. I like a drink as much as the next man. Unless the next man is Mel Gibson."

In 2011, Gervais was all sharpened fangs, and some Hollywood A-listers, perhaps more used to flattery at all times, Didn't like it. In 2012, Gervais went a little easier, but still he was replaced by Tiny Fey and Amy Poehler, who were brilliantly hilarious and managed to be so without offending as many people.

Still, among their best lines: "We have no intention of being edgy or offensive tonight," said Poehler, "because as Ricky Gervais found out the hard way, when you run afoul of the Hollywood Foreign Press, they make you host this show two more times."

Anyway, I plan to tune in. I may add stuff this this file as the show rolls on, if I feel like it.

Watching Jennifer Lawrence, I very much liked it when she said, "I actually watched all the movies this time — Well, not all of them, but you know what I mean!" Charming young gal. Very talented. She also complained about being terrified, and said "Never do this again!" a commandment I expect to be ignored.
Mark Ruffalo has a musical way of talking. He is very careful with his pauses and delivery. I suspect he would always be more comfortable when he has time to rehearse every line. Even watching him here, I think of him in "The Avengers": "The last time I was in New York ... I sort of broke ... Harlem." Very appealing actor.
The Twitter feed for the Globes is fun.
Harlan Coben ‏@HarlanCoben: "Yeah let's seat Breaking Bad way in the back. They're not going to win anything."
Mick LaSalle ‏@MickLaSalle: Wow. The TV people have a long, long walk. #globes
Sandra Bernhard ‏@SandraBernhard: who is that fabulous blonde with side swoop? #breakingbad she is divine!
Patton Oswalt ‏@pattonoswalt: Tina & Amy took the tiller of the glorious garbage scow that is the #GoldenGlobes & sailed it to Atlantis. That is all. Good night.
Mick LaSalle ‏@MickLaSalle: The more they drink the more you see their real personalities. nice Emma Thompson giving a standing ovation to the real philomena. #Globes
Michael Schaub ‏@michaelschaub: Bono and Diddy on the same stage sets off self-regard alarms; theater evacuated